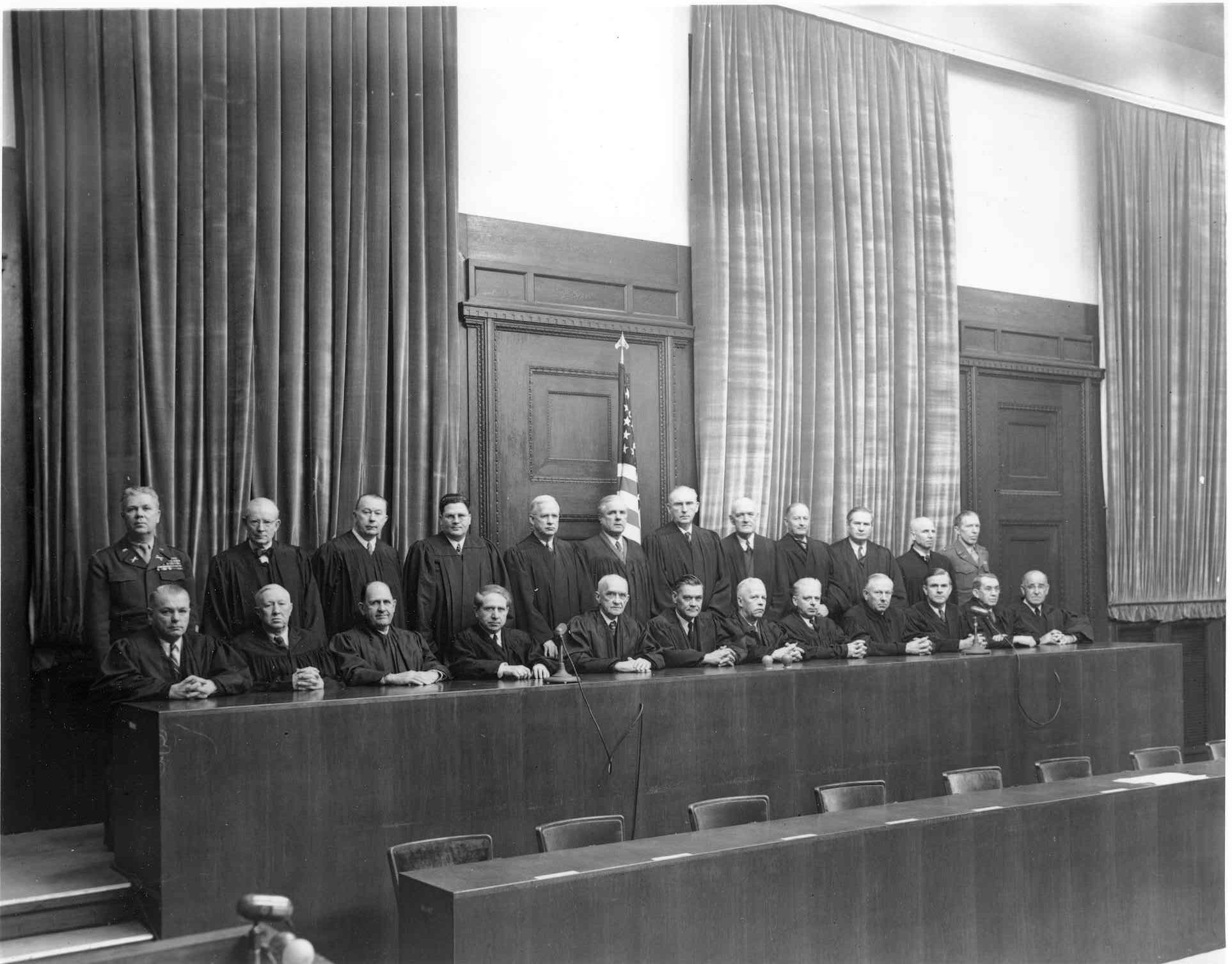 Each of the four Allied countries that had formed the International Military Tribunal -- the United States, France, Great Britain, and the Soviet Union -- provided one judge and one alternate for the court that convened in the fall of 1945.

Great Britain's Judges
Ruddy-faced British judge Geoffrey Lawrence, the sixty-year-old former Lord Chief Justice of England, served as president of the court, presiding over the trial and breaking any ties. British alternate judge Norman Birkett, one of the foremost criminal lawyers in England, was known for representing an American woman, Wallis Simpson, in the 1936 divorce that enabled her to marry King Edward VIII.

The American Judges
When he took office in April 1945, President Harry Truman had fired President Franklin Roosevelt's attorney general, Francis Biddle. To dispel hard feelings, the new president appointed Biddle as the judge for the Nuremberg trial. Truman was also considering the appointment of John Parker to a vacancy on the Supreme Court, but was reluctant to upset labor unions, which Parker had ruled against. An appointment as an alternate to the bench at Nuremberg gave Parker a prestigious post and freed Truman to make a different appointment to the Supreme Court.

Judges from the Soviet Union
Russian Ion Nikitchenko was a Nuremberg prosecutor before being recalled to Moscow and dispatched again as a judge. His alternate Alexander Volchkov was also versatile, having worked as a prosecutor, criminal judge, and a diplomat.

In Session
The court heard eight months of evidence and testimony. While the alternates did not have an official vote in any decision, the judges agreed that they should play an active role in deliberations. On September 2, 1946, the judges were sequestered with two interpreters for nearly a month. To speed the work, clerks had been preparing analyses of the defendants' guilt since May. On the first day alone, the judges convicted 16 of the 21 defendants.

Conspiracy to Commit War
The Nazi conspiracy and the guilt of its organizations were more complicated matters. De Vabres moved to strike the conspiracy count on the grounds that international law did not recognize it and the evidence did not prove it. He persuaded Biddle of this, but Birkett and Parker were convinced that a conspiracy had taken place and feared that a rejection of the count would cause the entire case to unravel. "If you say this dreadful war isn't planned, you bring about national disaster," Birkett argued. "You acquit the party. Do you want to acquit the Nazi regime?" Lawrence, Nikitchenko, and Volchkov agreed, but Biddle and the French judges remained steadfast. "How ... can one speak of conspiracy?" asked Biddle. "Only one voice was heard, namely Hitler's."

Ideology on Trial
Eventually Biddle brokered a resolution acceptable to all parties: the conspiracy charge would be applied to the waging of an aggressive war, but not to war crimes and crimes against humanity. While this decision enabled the judges to convict eight defendants on count one, it undercut the cases against the Geheime Staatspolizei (Gestapo) and Sicherheitsdienst (SD), which operated independently from the Nazi war machinery. The French judges could not accept the appearance of exoneration. In the end the judges convicted these organizations, along with the Schutzstaffel (SS) and the Nazi party leadership, but ruled that membership alone did not prove guilt. This concession diluted the trial's condemnation of the crime of Nazi ideology, rather than diluting the countless separate crimes.

The Convictions
On Monday September 30, 1946, the court reconvened. The judges arrived in black, bulletproof cars to the sound of siren wails. The buzz and activity of the trial became an eerie stillness as the courtroom awaited the verdicts. The judges first read their legal reasoning, then their verdicts on the organizations, followed by their justifications for their decision. The following day Hermann Göring and his fellow defendants, many wearing dark glasses, filed into the court to hear their fates. German radio broadcast the proceedings. The 1500-word conviction of Göring came first, and the rest of the judgments followed. After a noontime recess, during which the press swarmed the acquitted men, the defendants were brought before the court one by one to hear their sentences. Göring saluted before leaving the courtroom. Hess refused earphones and did not hear his sentence. After receiving a sentence of life in prison, Walther Funk broke into sobs and bowed before the judges. At 3:40 p.m. the tribunal adjourned for the last time.