Ask for the DVDs at the Information Desk. 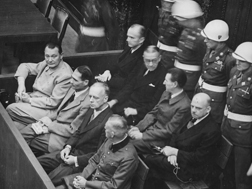 The legacy of Nuremberg / BBC in association with CTVC ; written and presented by Joan Bakewell ; produced by Anna Laura Malago ; directed by Steve Smith. Films for the Humanities, [1996],1 videocassette (50 min.)

Excerpts from the trials and discussions on Nuremberg's influence on contemporary wars and genocide by looking at war crimes in Bosnia and the process of reconciliation in the new South Africa today. Desmond Tutu, Jacques Verges, Christian Tomuschat and David Cesarani examine moral and ethical issues involved.
VC D804 .G42 H4 1996

Stream through Films on Demand. 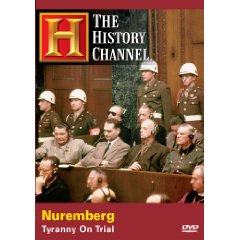 Stream through Films on Demand 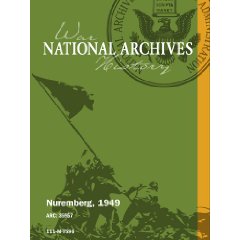 Originally released in 1949 by OMGUS (the Office of Military Government United States) in occupied Germany.  Scenes  of the Nuremberg trial including testimony and statements from defendants, procecuting attorneys, judges, and witnesses.

This film was released immediately after the conclusion of the Nuremberg Trials, 1946.  Produced by the Russians with stark images and uncompromising narrative in English, 57 minutes. 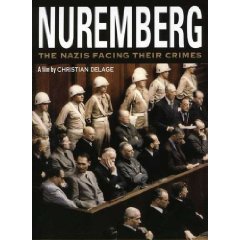 Nuremberg: The Nazis facing their crimes (French) A film by Christian Delage based on the archive of courtroom proceedings filmed under the supervision of John Ford. Includes interviews with Benjamin B. Ferencz, Ernst Michel, Budd Schulberg and Richard W. Sonnenfeldt.
KZ1176.5  .N875 2006

That Justice Be Done (1945 10min.) A propaganda film made for the US Chief of Counsel at Nuremberg and the War Crimes Office of the JAG.  Excerpts Jackson Center - Youtube

Nazi Concentration Camps (1945 58min.) The official documentary film compiled by Allied military and shown at the IMT on November 29, 1945. 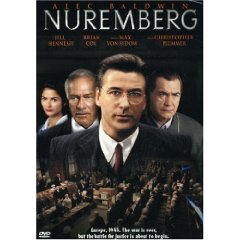 "Reality" television is the rage, but the programming thankfully isn't all millionaire wannabes and island survivors. Beginning on July 16, TNT will present "Nuremberg," an original four-hour television movie on the Allied nations' 1945-46 prosecution of the principal Nazi leaders. The movie presents a central, timeless idea: nations can, through law, respond to and thus try to prevent the brutal excesses of aggressive war and genocide. Although the production could have been more historically accurate, its effort to teach Nuremberg is commendable.

The Nazi Plan a four hour compilation film, was shown as evidence at the International Military Tribunal (IMT) in Nuremberg on Day 17 of the Trials (December 11, 1945). It was compiled by brothers Budd and Stuart Schulberg and other military personnel, under the supervision of Navy Commander James Donovan.

The compilers took pains to use only German source material, including official newsreels and other German films (1919-45). It was put together for the US Counsel for the Prosecution of Axis Criminality and the US Office of the Chief Counsel for War Crimes.

The four-part film was received in evidence as IMT exhibit USA-167.

The links below are to segments of the orginal film The Nazi Plan.

The Nazi Plan: Annihilation of Jews

Shortly after the trial, writer/director Stuart Schulberg, and his editor Joseph Zigman, were engaged to make the official film about the trial.  This film, completed in 1948, was suppressed in the U.S. government.  It has recently been restored by Sandra Schulberg. 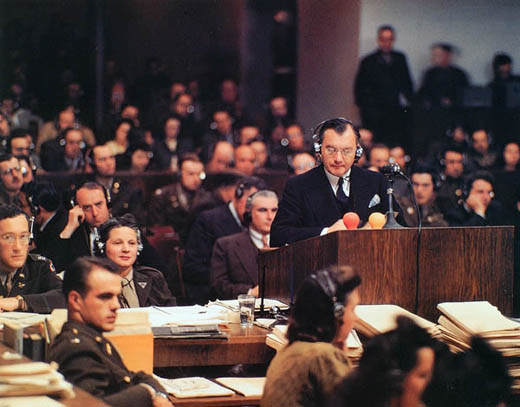