The Doctors' Trials and the Nuremberg Code 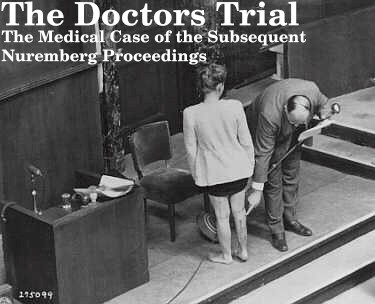 On August 19, 1947, the judges delivered their verdict in the "Doctors' Trial" against Karl Brandt and several others. They also delivered their opinion on medical experimentation on human beings. Several of the accused had argued that their experiments differed little from pre-war ones and that there was no law that differentiated between legal and illegal experiments.

In April of the same year, Dr. Leo Alexander had submitted to the Counsel for War Crimes six points defining legitimate medical research. The trial verdict adopted these points and added an extra four. The ten points constituted the "Nuremberg Code". Although the legal force of the document was not established and it was not incorporated directly into either the American or German law, the Nuremberg Code and the related Declaration of Helsinki are the basis for the Code of Federal Regulations Title 45 Volume 46[1], which are the regulations issued by the United States Department of Health and Human Services governing federally funded research in the United States. In addition, the Nuremberg code has also been incorporated into the law of individual states such as California, and other countries[citation needed].

The Nuremberg code includes such principles as informed consent and absence of coercion; properly formulated scientific experimentation; and beneficence towards experiment participants.

Sentencing of the defendants of the Doctor's Trial

The great weight of the evidence before us is to the effect that certain types of medical experiments on human beings, when kept within reasonably well-defined bounds, conform to the ethics of the medical profession generally. The protagonists of the practice of human experimentation justify their views on the basis that such experiments yield results for the good of society that are unprocurable by other methods or means of study. All agree, however, that certain basic principles must be observed in order to satisfy moral, ethical and legal concepts.